Hi everyone!  I’ve noticed a lot of focus on Halloween in the last week.  In our home, we are slowly warming up to the upcoming holiday.  Lil is both concerned and intrigued by all things spooky, so I have had to be very selective about how we “Halloween” craft and create.  One of my favorite activities in the classroom was to draw on mirrors so this little project came about easily as I was eager to play with mirrors!  It’s something fun and seasonal, but certainly not spooky! 🙂 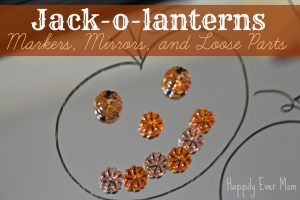 I drew three simple pumpkins on our mirror and placed the pumpkin jewels and tongs on the mirror as well. 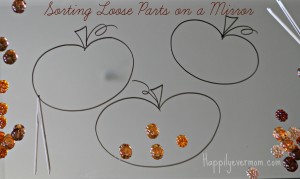 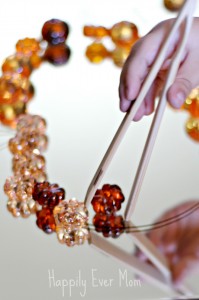 After she had filled the pumpkin, we noticed the outlines of each pumpkin.  We alternated turns by placing pumpkin jewels along the line and, at one point, we saw a repeating pattern of two colors.  We talked about how the colors repeated, but then the focus shifted back to going around the entire pumpkin.  I love little moments like those.  Simple and fleeting, but such an opportunity for learning! 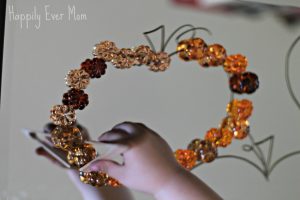 When we used all of the pumpkin jewels to make an outline, I posed the simple question: “I wonder what these pumpkins would look like with faces?”  Lil got to work immediately.  She made very a large smile on the first pumpkin.  Next, she tried to make a “boo” face as she called it, but she got so scared that she quickly turned it into a smile!  I couldn’t help but chuckle – Halloween should be an interesting night for her! 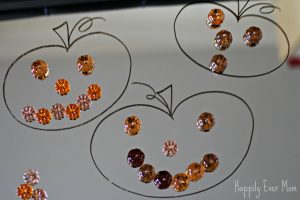 I loved how sweet these little pumpkins turned out.  But, once Lil heard that we could erase the pumpkins with a baby wipe, the pumpkins quickly disappeared! 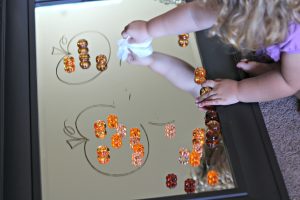 She experimented with drawing on the mirror by drawing her own pumpkin patch.  When she was satisfied with her drawing, she asked me to draw some new pumpkins.  I put some numbers in the pumpkins and she began sorting on her own!  She is really drawn to sorting and counting, so this was perfect for her. 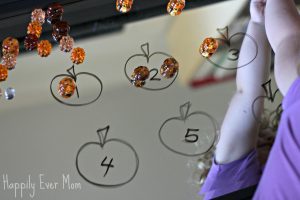 She counted each one to make sure the jewels represented the right number. 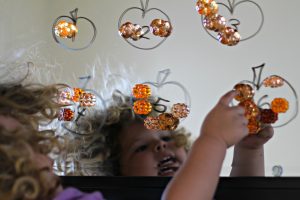 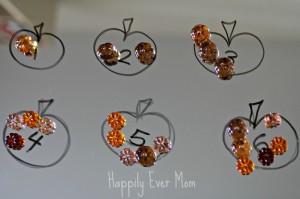 The last thing that we did was to sort our jewels by shape (the basics of classification!).  And, then we counted the number of jewels in each group.  I love that she predicted that the larger pumpkin jewels (the ones on the right) would be the largest group – this is so typical of a three year old.  I love watching textbook development in my own child.  When I told her that the smallest jewel (the one on the left) had the highest number of jewels, she was astonished.  Did I mention I love witnessing children learn?!  Awesome! 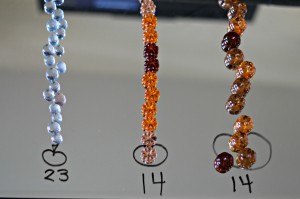 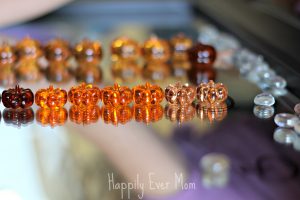 Our play was so dynamic.  It evolved organically as we interacted with one another and learned together.  I was also able to observe Lil’s interests (numbers and sorting) and her persistence and engagement.  I was really amazed with how long she played with this.  I look forward to setting it out again and watching how she will play differently, or perhaps, similarly.  Such a simple activity yet there are so many ways to learn and to play!

Do you use mirrors for play?