My husband is an amazing bread maker.  As I looked at his new baby (his whole wheat sourdough starter), I wanted to make some new, interesting dough for Lil and I to play with.  Plus, my soon-to-be-moving son, will certainly be eating play dough that falls on the floor, so I wanted to make something safe for him as well.  I have had to repeatedly explain to my sweet daughter that we aren’t going to feed the dough to Matthew, but rather we are trying to make it safe for him if he happens to put it in his mouth….I somehow picture her feeding him play dough in the future…but, for now, he’s safe!  I grabbed some left over herbs and a couple of lemons and we got to work. 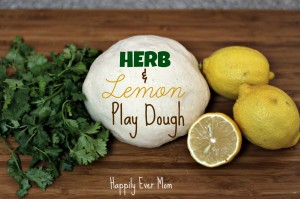 Here are some play dough recipes that I’ve used and love:

No cook Play dough from The imagination Tree

We used The imagination Tree’s recipe which calls for – flour, salt, vegetable oil, cream of tarter, and boiling water.  Most recipes call for these ingredients, but I like that the boiling water cooks the play dough for me instead of cooking the ingredients in a pan – I always seemed to over cook some areas of the play dough when I was a preschool teacher.  But, this method makes it easy! 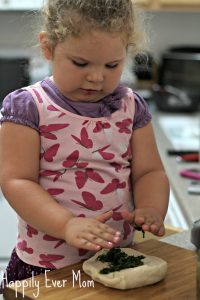 We did not add any dye to our play dough.  Instead, we blended up the herbs and kneaded it with half of the cooled play dough. 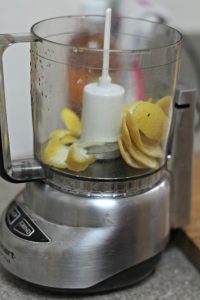 Then, we added lemon peels to the food processor (with a touch more vegetable oil).  As a note – I would have cut much smaller pieces of peel.  It was too thick for my food processor to break down so I had to take it out and chop it up a bit.  Ideally, I could have grated the peel, but I just didn’t have the time to do that!

Regardless, the lemon smelled heavenly!  Although, I would have used lemon extract to really bring out the smell!  Then, we added that to the other half of our play dough. 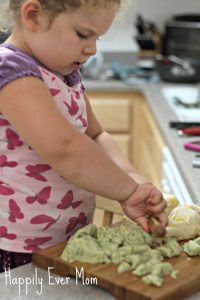 Lil loved kneading the dough and cutting both balls into fourths.  Then, smaller and smaller pieces.  It was the perfect activity for her while I busily cooked dinner.  She used the knife from her cutting foods – it worked perfectly!  She often helps me cook dinner, but tonight, she wanted to work with her new dough. 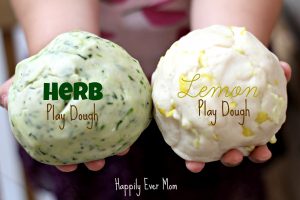 Tomorrow, we have big plans for this dough: pizza, because the herb dough smells and looks like the perfect crust and, muffins, because the lemon dough smells just like lemon bread.  It will be lovely to see what other types of play these doughs inspire.  Bon appetit!

Are you using play dough in your home?