We recently had a giveaway on this blog for 2 Pinkalicious cupcake cookbooks – congrats to the winners!  The best part was that we threw a perfectly Pinkalicious party for my daughter and her friends.

Here’s the details from our party: 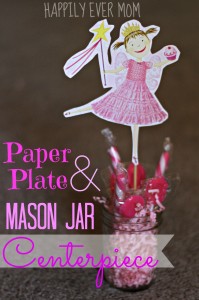 I started with just a few simple decorations including this cute paper plate center piece.  I took one of my large Pinkalicious themed plates and cut along the cute Pinkalicious in the middle.  Then, I taped it to a skewer that I had on hand.  I placed this along with some pink shredded paper and pink candy into an empty mason jar – voila!  A quick and easy centerpiece that looked oh-so cute! 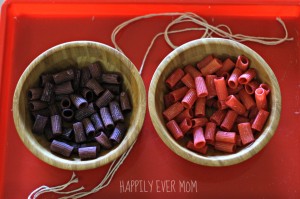 I dyed 1 scant cup of large, dried noodles with 2 tablespoons of vinegar and around 7 drops food coloring in a large zip lock bag.  Then, shake, let them sit in the bag for about an hour, and lay them out on some foil to air dry over night!  I chose both pink and purple because my daughter loves both Pink and Purple equally. 🙂  Then, I cut some string. I tied a noodle on one end and I wrapped the other end with clear tape to prevent fraying.  This was just a little activity to help fill in the waiting gaps while I got frosting and food ready for the girls! 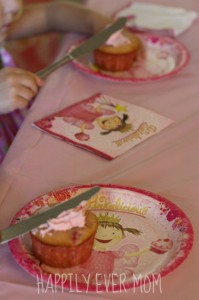 Then, each girl got to spread their own frosting.  When I announced that it was time to decorate, my daughter literally started yelling, “IT’S CUPCAKE DECORATING TIME!!”  I’ve NEVER heard her yell like that, but hey – it really was that exciting! 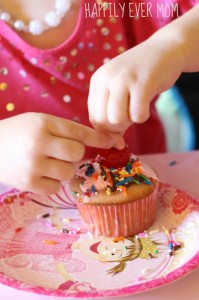 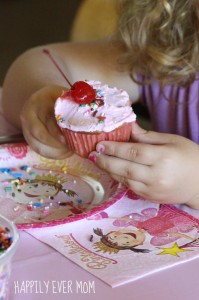 The girls added sprinkles and a cherry as well.  My favorite moment was watching the girls put the cherries on upside down.  They tried desperately to get the stem to stick to the frosting and all I could think was: they’re trying to put it on like a tree!  It was sooo cute to witness!  Eventually, with a little prompting, they figured out that the cherry easily sat on top of the frosting instead of the stem. 🙂 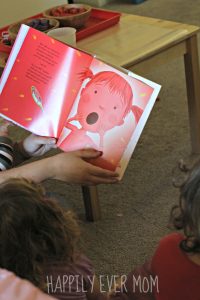 While my daughter finished eating (she’s the slowest eater on the planet – well, maybe not the planet, but you get the idea), one of the moms started to read the book, Pinkalicious, to the girls who had finished.  It was so cute to watch them all gather after they had eaten their cupcakes – it was great timing! 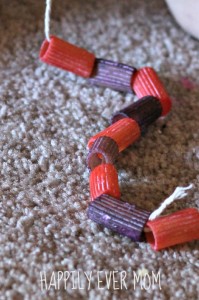 Then, we finished up with some noodle necklaces.  This was my favorite shot of one of the girls who had her necklace down between her feet as she worked hard to thread a patterned necklace! 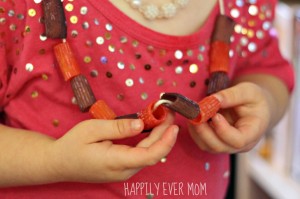 And, the result!  A perfectly Pinkalicious noodle necklace!  The girls had a lovely time getting to celebrate pink together (and, a little bit of purple :-)).  Oh, and the cupcakes that we ate were simply divine.  If I can bake them, so can you (seriously, I’m the one who ruins the mashed potatoes on Thanksgiving…the kind from a box…;-)).

What kind of party will you be throwing this year?

In full disclosure, the Pinkalicious marketing team provided the party products shown about for us to throw this party in addition to the 2 Pinkalicious cupcake cookbooks for us to giveaway on this blog! A big thank you to the team!

Katie Joiner is a happy work-at-home Mom. When she's not busy saving her cats from the kids and trying to figure out what's for dinner, she can be found taking photos, laughing with her kids, and figuring out whether or not she can sneak in another Starbucks. Kids 7, 4, & baby <1. Come over and say hi at her FB page, @Happilyevermom, or , her favorite spot, Pinterest.