I can’t stop my daughter from jumping.  It’s like she has springs hidden in her heals.  It normally doesn’t bother me, except when I ask her to go somewhere QUICKLY (hopping takes her a while).  For the most part it’s endearing, especially since her Dad used to do the same thing when he was a little boy – the need to jump flows through her veins!

While we were reading one of our favorite books, Chicka Chicka Boom Boom

by Bill Martin, Jr., I noticed that the letters in the book like to move, too.  It was the perfect parallel to draw upon as Lil has shown a real interest in letters recently and her three year old body is constantly in motion.  I saw a couple of ideas on Pinterest about spraying chalk letters with a spray bottle (see the original post here on this AMAZING website) and I got to thinking: why not combine Lil’s love of jumping with a little kinesthetic learning?

I made a large grid of chalk letters and Lil jumped on the letters as I called them out.  Of course, I had to take my turn jumping while Lil called the letters, too! 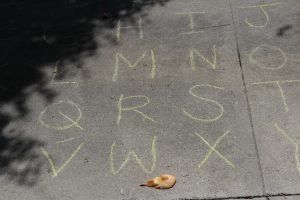 Now, I know that I’m not the first Mom to think about jumping on chalk letters (thank you amazing Moms out there who are pushing the envelope for children’s activities!!), but I wanted to draw upon themes in the book as well.  You could do these really awesome activities indoors, but I was curious how I could combine Lil’s letter learning with her favorite gross motor movement: jumping! 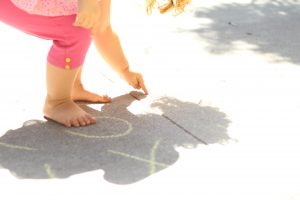 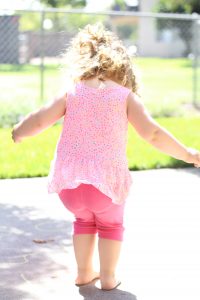 While reading the book later that night, I talked about how the letters are moving in the story just like we moved in our game.  I asked questions like, “Why do the letters move?”  “Where are they trying to go?”  These open ended questions are so important in scaffolding children’s learning and critical thinking (more on this in posts ahead).

The moving letters in the book inspired me to adapt the activity to jumping because that’s Lil’s favorite movement.  I encourage you to think about how your child likes to move:

The options are limitless, but the most important thing is to adapt to your child’s interest or it won’t be interesting for anyone involved!

When Lil woke up from her nap today, the first thing she said was, “Can we please go hop on the alphabet, Momma?”  Not only was I blown away with how excited she was, but I was also shocked with how many new letters she recognized when we started hopping.  It was so exciting because I didn’t mention the game, I wasn’t even thinking about it, and she initiated playing again.  Success.

How are you moving and learning with your kids today?