I’m always looking for ways to use things that we have around the house in new ways.  On this particular day, I saw some chalk on the porch and I took advantage of the large amount of cement we have in front of our home (now, our old home!).  We made a life size maze out of chalk and added my daughter’s name inside. It not only got her moving, but it also helped her to learn her name! 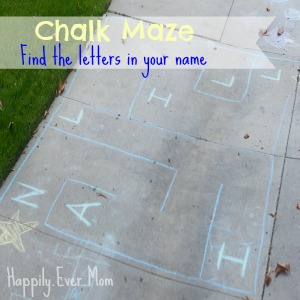 I was inspired by one of Lil’s favorite downtime activities: Easy Mazes by Shinobu Akaishi – a Kumon workbork.  We purchased this when we had a long flight home from Wyoming.  I thought Lil was a little young for this workbook, but she blew me away with how quickly she was able to complete more complicated mazes.  Since the new maze book was such a hit, I decided to make a giant chalk maze for her to get outside. We made it a new learning opportunity by adding the letters in her name throughout the maze! 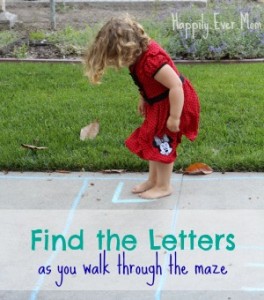 I started by drawing a large square with two openings: the beginning of the maze (marked with an arrow) and the end (marked with a star).  These are the symbols that the Kumon workbook uses- it’s a great visual reminder of where to start and stop! 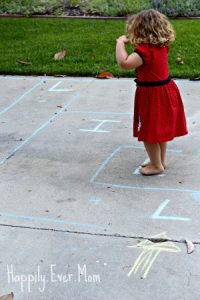 Then, I slowly added lines.  Because chalk washes away so easily, I was able to use some water to “erase” a line that I drew incorrectly!  Lastly, I wrote all the letters in Lil’s name throughout the maze. 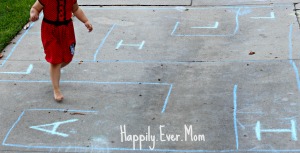 Lil shouted out each letter as she found one – it was so wonderful to watch her moving and learning!  The best part was that after we made the maze, she had learned the correct sequence of the letters in her name (of course, she’s got repeating letters so it can be a bit confusing!).  It was a big hit, but I have to warn you, it may leave your child asking: Can you make me another maze…pleeease??

Do you think your child would like to learn this way?